When it comes to methane leak detection, state-of-the-art technologies are being used throughout the natural gas supply chain, from production facilities in basins, through transmission pipelines, all the way to the distribution sector where utility companies deliver natural gas to neighborhoods and communities to heat our homes and businesses. So, it’s natural to ask, “what size of a methane leak really needs to be detected?” As you might expect, the answer is “it depends.”

In the distribution sector, a methane leak with an emission rate of 1 kg/hr is considered massive because natural gas pipelines are in close proximity to general populations and our utility companies’ top priorities are always to keep us safe. In addition to delivering gas safely, utility companies also want to detect leaks to reduce environmental impacts of methane emissions also, but for reference, all those small leaks only represent an EPA-estimated 7%  of the oil and gas industry’s total emissions.

At the other end of the natural gas supply chain, in the production sector, it takes a roughly 100-kg/hr leak to be considered massive. While safety is again every production company’s top concern, access to a production site is limited to highly trained professionals, production facilities are typically far from population centers, and there are typically fewer trees, large buildings and other structures present that can cause the gas to pool up into dangerous situations. Because the oil and gas production sector represents an estimated 68% of the industry emissions, detecting leaks for the sake of responsible operations and sustainability becomes a primary focus for production companies.

In this second part of our blog series on methane detection sensitivity, we examine what size of leaks matter in the production sector to achieve meaningful emissions reduction. But before that, here’s a brief refresher on the first part of the blog series.

What Detection Sensitivity is Needed for Meaningful Emissions Reduction in the Production Sector?

In order to assess the impact of different detection sensitivity levels on emissions reduction, we first need to understand the distribution of emission sizes and the relative importance of methane emitters typically found in a production basin. By aggregating emission rates from thousands of detected emitters into an Emissions Distribution plot, as shown in Figure 1, we can then determine the percentage of emissions that would be detected for a given methane detection sensitivity.

Figure 1 shows Emissions Distributions for over 12,000 production facilities in five major North American oil and gas basins (Alberta, Anadarko, Bakken, Denver-Julesburg, and Permian, the order of which does not match the order in the plot) measured by Bridger’s aerial LiDAR technology, Gas Mapping LiDAR. Each data point on the plot represents one emitter (e.g. a leak). The x-axis shows the emission rate, typically in a logarithmic scale, and the y-axis shows the percent of aggregate emissions detected at that rate. Moving from left to right moves from large emission rates to small emission rates. To figure out the percentage of emissions that would be detected by a given detection sensitivity (for approximately 50% PoD), simply find that detection sensitivity on the x-axis, go up until you reach the basin distribution of choice, and then go left until you reach the percentage on the y-axis. A few examples of this are highlighted by blue dashed lines on the plot. Before we go into those examples in more detail, there are some very important features of Emissions Distributions that deserve attention. 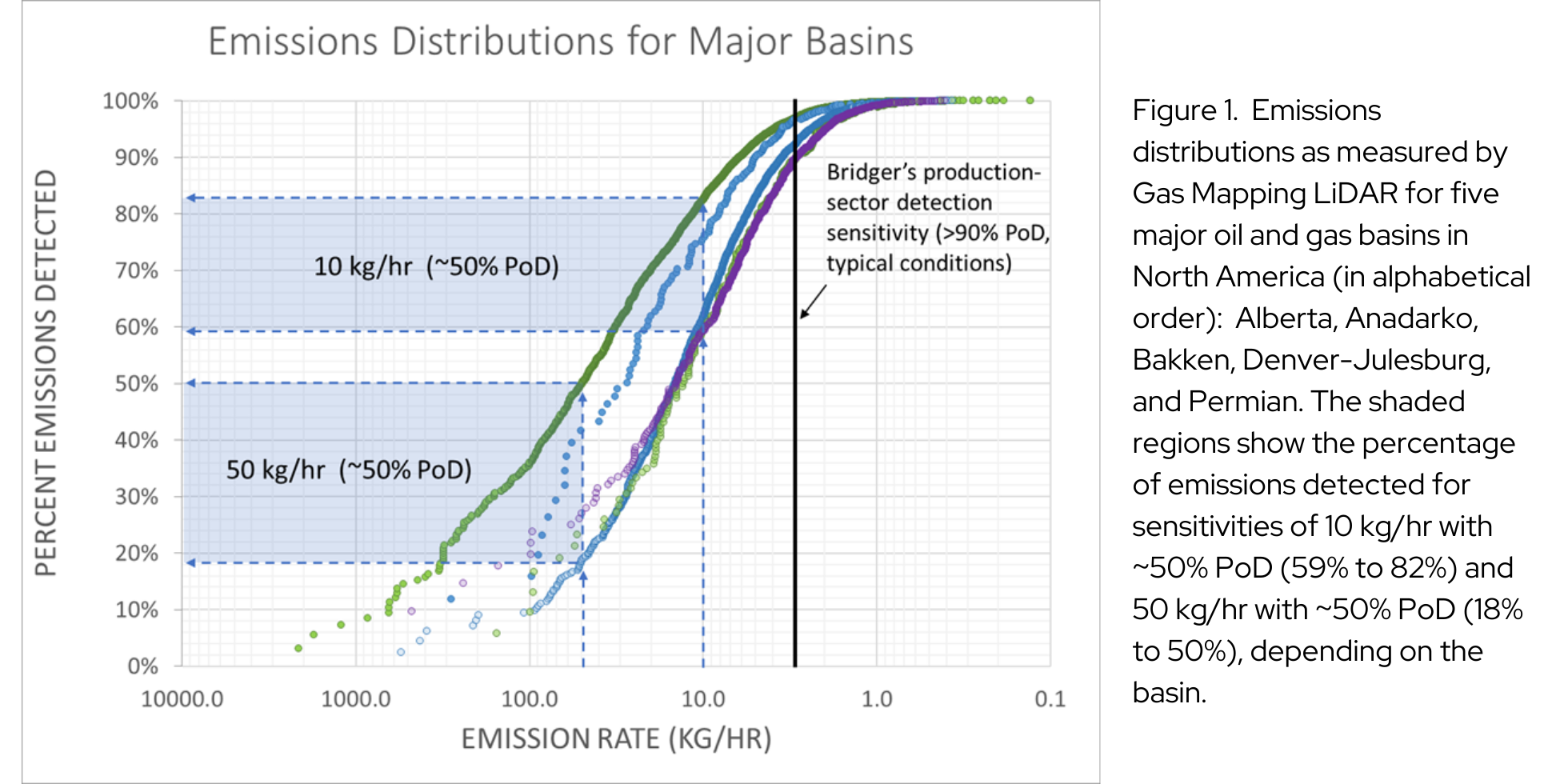 First, note that Bridger’s emission rate detection sensitivity of 3 kg/hr (>90% PoD under typical conditions) for the production sector is represented by the black vertical line in the figure. You should expect to be given this “high confidence” emission rate (under typical conditions… not ideal controlled release conditions!) so you can trust that a negligible number of larger leaks than this (to the left of the vertical black line) were undetected. For smaller leaks than this (to the right of the vertical black line), the chances of detecting leaks go down. The plot shows that Gas Mapping LiDAR detected production-sector leaks all the way down to nearly 0.1 kg/hr (the far-right end of the plot), but the probability of such a “lucky” detection is extremely low… the vast majority of leaks that size are missed in the production sector.

Second, it’s no coincidence that the emissions distribution rolls off at the right end of the plot for emission rates smaller than the high-confidence detection sensitivity. That roll-off is not because those small emissions stop piling up, it’s largely because Gas Mapping LiDAR stops detecting them below the stated detection sensitivity. So, the emissions distribution only shows what is measured by a sensor technology (in this case by Bridger’s Gas Mapping LiDAR). There will always be leaks missed by any technology at the right end of the plot. This means that the Emissions Distributions in Figure 1 really show what percent of the emissions detected by Gas Mapping LiDAR would be detected if a less sensitive detector was used. Because we know our probability of detection for every actual measurement we make, we can rigorously estimate that we miss less than 10% of the aggregate emissions in typical basins. The better the detection sensitivity used to generate an Emissions Distribution, the less it’s necessary to estimate the contribution of leaks that were undetected. Beware of this... if an Emissions Distribution for the production sector rolls off at 100 kg/hr, for instance, they are forced to estimate the large fraction of emitters that they miss.

Third, at the left end of the plot, notice how a relatively small number of large emitters make up a disproportionately large percentage of the aggregate emissions. For example, the largest emitter in the distribution (the left-most data point) alone makes up about 3% of the entire detected emissions for that basin. This is a characteristic of what's called “fat-tail” or “heavy-tail” distribution. When viewing an Emissions Distribution, you should always consider whether a statistically significant number of sites was sampled to adequately characterize the distribution. The challenging part is that no matter how many sites you measure, you will always have too few data points at the fat tail end (i.e. under-sampled). And if you keep searching over more and more sites and over more and more time, you will always eventually find a bigger leak (check out this great article on power-law distributions). With that in mind, one may ask how many sites are enough for an Emissions Distribution? While different people have different opinions on that answer, what we can say is that Figure 1 is an “as measured” distribution representing over 12,000 production facilities. With very few exceptions, that’s more facilities than any single operator owns in North America.

So how small of a leak needs to be detected?

Now with those details out of the way, let’s get back to the topic at hand: “What detection sensitivity is needed for meaningful emissions reduction in the production sector?” Again, that depends on what amount of methane you’re okay with leaving undetected.

From Figure 1, if one selected a detection sensitivity of 10 kg/hr with a ~50% PoD instead of Bridger’s detection sensitivity, the blue dashed lines in Figure 1 show that this level would have been sufficient to detect between 59% and 82% of the emissions that were detected by Gas Mapping LiDAR, depending on the production basin. This is in the range of the EPA’s stated goal to “significantly reduce emissions of greenhouse gases and other harmful air pollutants from the Crude Oil and Natural Gas source category.” Officials have put a figure to the reduction goals of reducing methane emissions by 75%  as compared to current levels.

The Emissions Distribution also uncovers the negative impact of using poorer detection sensitivity. If a detection sensitivity of 50 kg/hr with ~50% PoD is used, only between 18% and 50% of the emissions detected in our study would be found. To look at that a different way, anywhere between 50% to 82% of emissions would go undetected.  It’s important to understand that the undetected percentage of emissions will never be detected by the technology, no matter how many times the sites are scanned. To “lock-in” at least 50% to 82% of existing emissions could have significant negative impacts on the sustainability of the industry.

Learn more about this Emissions Distribution graph in an explanatory video here.

What Sensitivity Does Gas Mapping LiDAR Operate at In the Production Sector?

At this point, it may be natural to ask “why not just detect 100% of the emissions?” Bridger has worked closely with the oil and gas industry to identify a methane detection sensitivity that balances two factors: First, the ability to detect the vast majority of methane emissions in production basins, and second, to enable efficient, impactful, and cost-effective repair and mitigation activities. With broad input from the production sector of the oil and gas community, Bridger implemented for its own technology a detection sensitivity of 3 kg/hr with a >90% probability of detection, achievable under typical conditions.

Gas Mapping LiDAR has the ability to detect much smaller emission rates, but our selected production-sector detection sensitivity already detects >90% of basin-wide emissions, while focusing operator time and resources on repairing leaks that can appreciably impact emissions reduction.

Have a Question About Methane Detection Sensitivity?

Contact the team at Bridger Photonics by filling out this form, or email us at info[at]bridgerphotonics.com and we’d be happy to answer any questions you may have about detection sensitivity.

The EPA recently released a new proposed rule for methane emissions reduction in oil and gas infrastructure and solicited...