What's the Difference Between ppm and ppm-m?

Before we jump into discussing the two types of concentration measurements, it’s important to first distinguish these from emissions rate.  Both types of concentration refer to how much of a gas is present at a given time. Emission rate, on the other hand, refers to how much of a gas flows over time (e.g. escaping from a leak). So, it is possible that a very small leak (low emission rate) leads to a very high concentration (lots of gas present) simply because, for example, there’s no wind to carry the gas away, so the gas piles up in one spot. Conversely, it is possible to have a very large leak (high emission rate) result in a low concentration (little gas present) at a single point because, for example, the wind quickly disperses the gas.

Historically, concentration has been predominantly used instead of emission rate because it is concentration, not emission rate, that can be a direct indicator of safety. For instance, the toxic level of methane (1,000 ppm) and the lower explosive limit of methane (50,000 ppm) are both concentrations. More recently, however, there is growing concern for how much methane gas is escaping into the atmosphere due to the environmental impact. In that case, emission rate is the most important indicator and must be calculated to measure emissions inventories and to establish certified or responsibly-sourced natural gas supply chains. In this blog, we will focus on the two types of concentration and save emission rate for another day.

Concentration:  What is PPM?

To make our terminology more precise, the term “gas concentration” alone typically refers to how much of a gas (either in mass or in molecules) is present at a certain time and at a certain location. Parts-per-million, or “ppm”, is commonly used as a fractional unit of measure for concentration. As an example, a methane (molecular) concentration of 2% means that 2 out of every 100 air molecules is methane. Similarly, a methane concentration of 2 ppm means that 2 out of every 1 million air molecules is methane. In the extreme, 100% or one million ppm means that every molecule at that location is methane (pure methane gas).

A benefit of measuring concentration is that concentration can be a direct indicator of safety, as mentioned in the previous paragraph.  However, a concentration measurement is performed only at a single point within a gas plume. So there still may be unsafe concentrations of methane gas elsewhere within the plume.

Concentration is often measured by point sensors in units of ppm. These sensors must come into contact with the gas and measure the concentration at a single location. So point sensors cannot image a gas plume remotely from afar.

Why make things more complicated by measuring a “column”? Because remote sensors, like our Gas Mapping LIDAR, measure the gas plume from afar (instead of within the plume) and therefore must measure along a column that intersects the gas plume. Remote sensors typically measure the path-integrated gas concentration in units of ppm-m. For the case of Gas Mapping LiDAR, we direct an eye-safe laser beam from an aircraft towards a plume near the ground. Some of the laser light is absorbed by the methane molecules on its path to and from the ground. The amount of absorbed laser light is proportional to the cumulative methane concentration along the entire path traveled by the laser beam (i.e. the path-integrated concentration).

Measuring remotely (instead of within the plume) has its benefits as well. First, because the measurements are performed remotely, it is possible to efficiently generate imagery of the gas plume. Gas Mapping LiDAR rapidly scans the laser beam across the scene on the ground to create gas plume imagery. Each pixel of the gas plume image can be in units of ppm-m because we’ve measured along a column (the laser beam path). With such plume imagery, it is often possible to accurately determine the leak source location and quantify the emission rate of the leak, which makes repairs efficient and makes emissions inventories and measurement-based gas certification possible.

The following example illustrates differences in the measurements of a gas plume between point sensors and remote sensors. For simplicity sake, consider an isolated gas plume reaching up to 100 m with a uniform concentration of 15 ppm, as depicted in the image below. Let’s also assume that there is no background methane in the atmosphere. While these assumptions are not very realistic, they makes things simpler to understand. 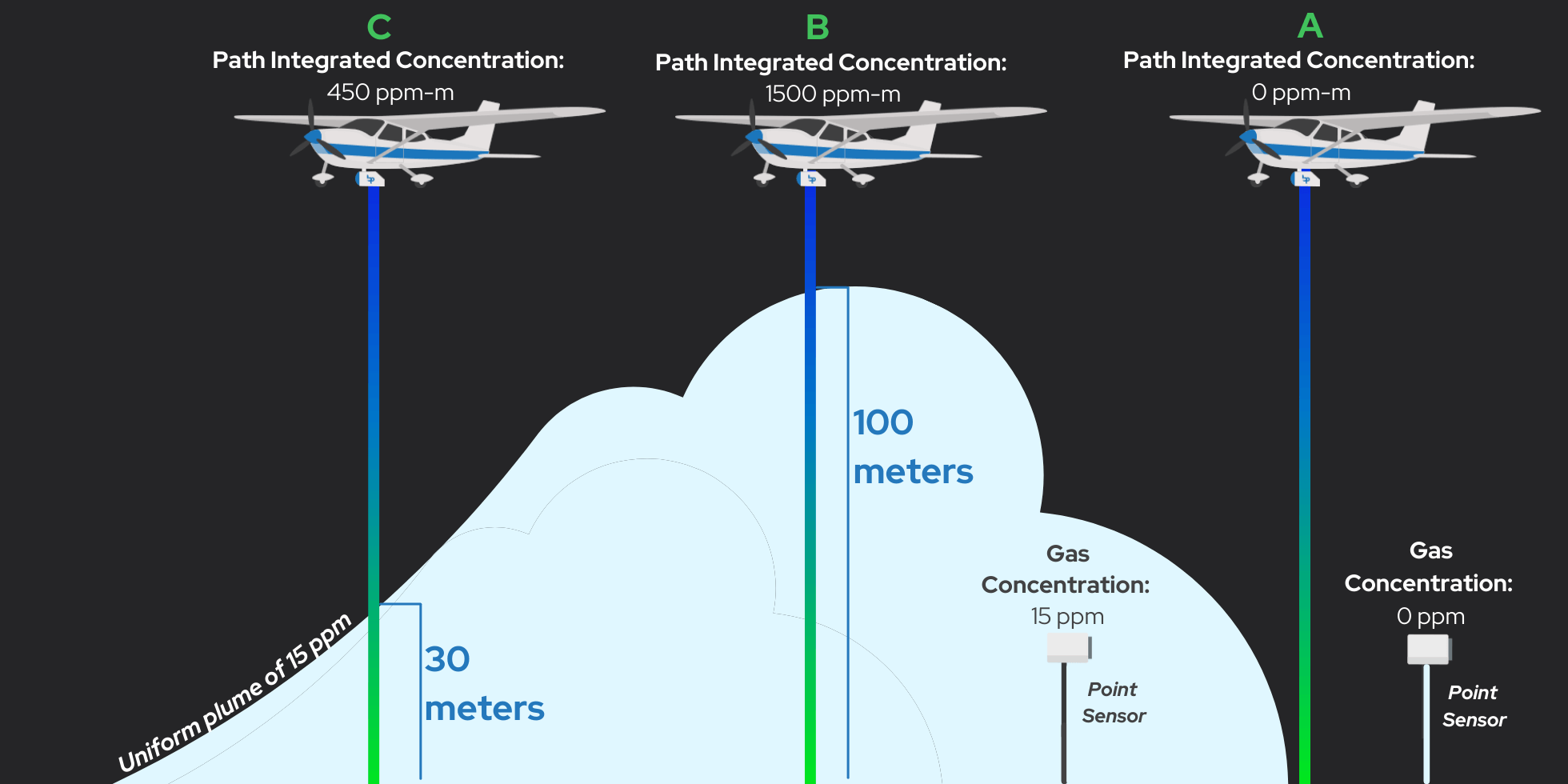 Point Sensor Measurement: A point sensor, shown toward the bottom of the graphic, will measure a concentration of 15 ppm anywhere that it is located within the plume.

Remote Sensor Measurement: An aircraft equipped with a remote sensor, like Gas Mapping LiDAR, scans the uniform concentration of methane along the laser beam path (i.e. the column) at different positions as it travels over the gas plume. As illustrated in the graphic above depicting the aircraft’s flightpath, the measurements are as follows:

Notice that the airplane’s altitude (i.e., the optical path length) does not factor into these calculations (this gets more complicated when there is ambient background methane gas present). The measurement is sensitive only to the cumulative amount of methane seen along the laser beam path. Additionally, the variation of the three individual path-integrated methane concentration measurements (0, 450, and 1500 ppm-m) provide information on the size and cumulative methane concentration of the plume. By scanning the laser beam and taking many rapid measurements, gas plume imagery can be generated.

Which Technology is Right for You?

Both point (ppm) and remote (ppm-m) sensors are valuable tools for quantifying methane, but each excels in different applications. If your only goal is to measure the absolute methane concentration at a particular point, like to measure maximum methane concentration at a workstation within a larger site, a point sensor may be sufficient. However, to image a dispersed plume and measure the cumulative methane emission, remote sensing is more effective.

Have a Question about PPM-M or Reducing Your Methane Emissions?

Fill out our contact form, and one of our team members will be in touch to help answer any questions you may have.

Gas Recapture: Can Operators Find Revenue When Using Gas Mapping LiDAR and Recapturing Methane? In our latest blog series, we...